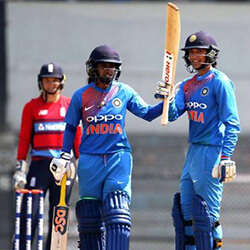 England have moved into the ICC Women’s World T20 final against Australia after an eight-wicket win over India in Antigua.

Natalie Sciver and Amy Jones punished the Indian team with a 92-run partnership as they claimed victory with 17 balls to spare. After winning the toss, the Indian team eventually collapses, losing eight wickets for 23 runs. England had lost two wickets early into the match, but Sciver and Jones saw them to the end. After losing their openers Tammy Beaumont and Danni Wyatt, who both fell cheaply, housemates Jones and Sciver earned almost identical innings, with Jones passing 50 with winning runs.

In contrast to 2017’s 50-over World Cup Final between the same sides, this year’s game was considered a “low-key win” with some mentioning that it was a dull event overall, with Jones and Sciver collecting runs without much trouble. India’s approach to the two was a mixture of all-spin attacks that saw the ball go short and wide off the stump, allowing the pair to sit comfortably and collect singles through a mid-wicket region that remained vacant.

The night’s opening semi-final saw Australia destroy their hosts the West Indies by 71 runs, on the same pitch that gave home to England and India earlier match.

The English team have now reached four of the six World T20 finals, having won the first tournament on home soil almost 10 years ago. Australia will prove to be a tough team as they look for their fourth World title.