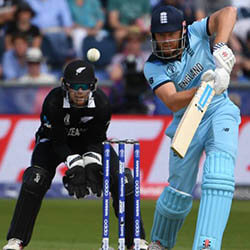 England has batted themselves into the lead during the opening day for their first Test match against the New Zealand side, which took place in Mount Maunganui. Three of the visitors’ top five were able to land half centuries as England closed quickly on 241-4. Ben Strokes claimed a 67 that was not beaten for the rest of the game following from fifties from Joe Denly and Rory Burns. Colin de Grandhomme took 2-28 for the hosts on a batting wicket.

The English side have become known for batting collapses in their last few matches, but this has been a strong start to the Test series. Captain Joe Root has been the only player in the top order that was not able to reach double figures, while Dom Sibley – making his debut – hinted at his more patient play style with a 22.

Stokes had been dropped on 63 by Ross Taylor later in the day, but he was able to push his team enough to allow them to close in on the New Zealand team, along with Ollie Pope who had claimed an 18. During their most recent our of New Zealand, England had lost for 58 on the opening day, but Denly showed enough determination that he made up for the losses the team suffered during their previous Tests. Talking about the game, Rory Burns said that it had been a tough but good day, and that he was not playing as well as he could have.