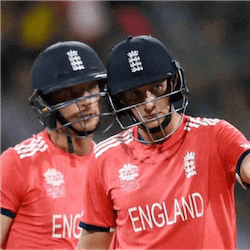 England Heads For The Cake Tin

The last couple of months have been a trying few months for England, with the unsavoury weather in New Zealand threatening to further dampen the English moods by delaying their flight out of Australia on Sunday. The trans-Tasman T20 tri-series continues in Wellington soon and if England are to reach the final, they will have to win both their remaining games against New Zealand.

Tuesday will reveal all, when England faces New Zealand at the Westpac Stadium in Wellington, also lovingly referred to as the Cake Tin. Whether the mention of cake will inspire the English sufficiently to go for gold is another question altogether. After all, no such inspiration was forthcoming when England received the worst whipping of their lives at the Cake Tin during the last World Cup.

Using What You Have

With the series now half-way there, and Australia having cemented their participation in the final on February 21st, the only question that remains is which side can overcome their respective batting challenges (of which, incidentally, there are many) and join Australia at Eden Park.

Playing on home turf is proving advantageous for New Zealand, even before the match commences. It means that New Zealand has more freedom of movement as far as selection goes, and as such, they have opted to include two new faces in an attempt to re-ignite the flame that is the New Zealand middle order. Former Hong Kong batsman Mark Chapman and wicketkeeper Tim Seifert will most probably both make their debut on Tuesday.

England have opted to go with what they have, which in itself, is an interesting choice for a course of action that is supposed to achieve nothing short of a miracle. Joe Root, Ben Stokes and Moeen Ali will not be participating in this particular series and to add injury to insult, bowler Liam Plunkett will also be sitting out as a result of a hamstring injury that is taking its time to clear up.

That having been said, it isn’t England’s bowling prowess, or lack thereof, that has lost them their first two matches of the tournament. Their batting has been utterly underwhelming, for lack of a stronger, more descriptive word. For a stronger, more descriptive word would be useful to describe the prevailing situation with what has been going on in the batting ranks.

England aren’t exactly known as a T20 team to be writing the Queen about, but then again New Zealand has suffered three defeats since playing Pakistan, which isn’t inspiring product confidence either.