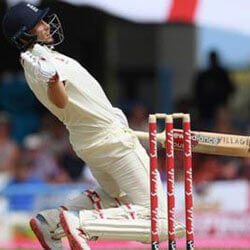 England has collapsed again after being bowled out for 187 during day one of their second Test playing against the West Indies.

The visitors, who left the field for 77 in the first Test, lost to 93-6 despite star player Jonny Bairstow hitting a total of 52. Moeen Ali claimed 60 for himself, and Ben Foakes made 35, but England ultimately lost their last four wickets for nine runs, with Kemar Roach taking 4-30 on a pitch that offered them an uneven bounce.

After having lost 215-4 to 246 all out for the second innings of their first Test played in Barbados, the team were sent to bat by the West Indies captain Jason Holder. Conditions proved difficult for opening batsman Rory Burns and Joe Denly, making his debut, and replacing Keaton Jennings. Both missed with expansive drivers before they were forced out early into their session.

The hosts totalled 30-0 by closing in Antigua, trailing behind by 157. Kraigg Brathwaite and John Campbell, openers for the West Indies, proved their skill on the field by batting out 21 overs, and are set to resume on 11 and 16 respectively. Although the English didn’t bowl badly, they will need some early wickets during day two if they hope to swing the match in their favour, or risk a series loss with West Indies currently leading the three Test series 1-0, but has thus far avoided the humiliation they suffered in Barbados.