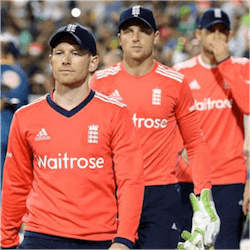 England has successfully completed a trilogy of Twenty20 losses as they deal with the reality of having been beaten by New Zealand’s Black Caps once again. The Black Caps made it all the way to 196 for 5, with Martin Guptill and Kane Williamson having been responsible for 65 and 72 big ones, respectively.

Alex Hales drove the English wedge all the way to 47, but it wasn’t enough to rise against trick-masters James Vince, Jos Buttler and Sam Billings. In the end, it all ended in nothing more than a fleeting cheap thrill for Hales, with no lasting dignity for England. Hope seemed to beckon for the English side in the appearance of Dawid Malan, but with England needing 37 from only three remaining overs, it was a losing battle facing Malan, one that ended in 184-9 for the visiting side.

Australia have already progressed to the final after having scored a three out of three. New Zealand will join the Aussies if they manage to beat them on Friday.

Ben Stokes Back In The Game

Meanwhile, hope beckons for the ailing English side as they anticipate the return of all-rounder Ben Stokes. Stokes, who had missed out on the entire Ashes series following charges of affray after an incident at a night club in Bristol last year, will be joining the English squad as they prepare to face New Zealand in Hamilton on Sunday.

The first trial of Stokes’ hearing is scheduled for March 12th, but Stokes isn’t required to physically appear at Bristol’s Crown Court.

However, if a statement issued by the England and Wales Cricket Board is anything to go by, then Stokes will not be joining in the action on Sunday. The T20 tri-series draws to a close on February 21st, after which England will play two Tests and five One Day Internationals against New Zealand, which is most probably where Stokes will be put back into play, despite the statement making it quite clear that any decision to include Stokes in upcoming matches will be made by head coach Trevor Bayliss and the England management team.

The question begs, who else decides under normal circumstances? Definitely a case of protesting too much in advance, Stokes will in all likelihood be part of the squad facing the Black Caps in the ensuing matches.

Bayliss told the press on Tuesday that it was important for Stokes to get back in the game as he was a sportsman and should be allowed to do what he does best.