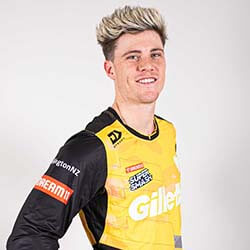 Young batting phenomenon Finn Allen has just become the first New Zealander ever to be bought by an IPL side before first representing the Black Caps. The 21-year-old will join Royal Challengers Bangalore in the place of Aussie Josh Philippe.

But the special selection may cost him another golden opportunity, which is to potentially get selected to make his debut with the Black Caps as part of the national side’s T20 squad about to face Bangladesh in Hamilton come March 28. What with RCB’s IPL 2021 season already staring on April 10, it may be too tight a turnaround in terms of travel and preparation time.

Black Caps selector Gavin Larsen has however confirmed that national side coach Gary Stead was currently in talks with IPL clubs regarding when exactly players would be required to report for duty in India. A decision will according to Larsen be made in the very near future.

Allen, after a smashing debut season with champions the Wellington Firebirds, will now get the chance to play alongside cricketing greats the likes of Indian captain Virat Kohli and South African great AB de Villiers. A superb and powerful hitter, Allen was seen securing a stellar century from just 50 balls in the Firebirds’ last match against Otago – a feat that saw him equal Peter Fulton’s record for the quickest century belted in a New Zealand A game.

Allen’s IPL selection by RCB takes the number of New Zealanders about to feature in the prestigious Indian Premier League competition to nine.