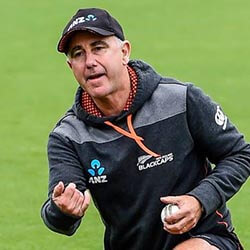 Black Caps coach Gary Stead has had his contract with New Zealand Cricket renewed for 3 more years. Come November 2023, the extension will have made of Stead the second-longest serving coach in the history of the board – and only beaten to the post by Mike Hesson’s 6 years spent at the coaching helm.

Even though no other person had been in line or interviewed for the role, New Zealand Cricket CEO David White has stressed that Stead was nevertheless made to pass through a formal and “robust” selections process.

Part of Stead’s re-entry interviews would definitely have involved a closer look at his highly-scrutinised relationship with Black Caps captain Kane Williamson. The two men have been known to share different views on issues related to selection processes and the effects of those processes on the culture of the team.

Though by his own admission a source of frustration to the Black Caps coach, the different in points of view proved to be no obstacle whatsoever to Black Caps qualifiers for World Cups in 2021, 2022, and even 2023 – to be played in India and Australia, respectively.

But despite their differences, said Stead ahead of Williamson’s upcoming departure to join the Indian Premier League in the UAE, it’s “still great” to be able to support the Black Caps skipper and have ongoing conversations with him about the two of them leading the team together. The relationship between the two men remains strong, said Stead, and will continue to stay strong in future also.