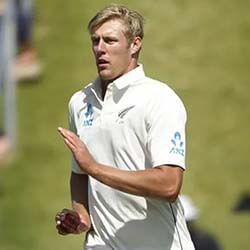 Former Black Caps skipper Brendon McCullum says he hasn’t been as excited about any newcomer as what he is about Kyle Jamieson since a young Kane Williamson.

New Zealand Cricket’s latest young rock star is currently preparing to return to wearing Black Caps attire against Pakistan for the first of three T20s beginning Dec. 18. The 25-year-old was recently named “Player of the Series” for his extraordinary performance in the national side’s 2-0 Test victory over the West Indies in Hamilton and Wellington.

Coach Gary Steed has in the meantime praised the young gun not only for his T20 performances to date, but also for his level-headedness and positive attitude. Jamieson has made an impact on every format he’s played so far, said Steed following the victory over the West Indies. Even though he experienced a difficult debut game at Eden Park, which Steed emphasised many first-game bowlers do, he turned his fate around at the Mount by playing a fantastic game. Although T20 can be “fickle”, said Steed, Jamieson possesses many skills and qualities many other players simply do not have.

Though Steed said Jamieson is in his opinion not yet ready to take on the responsibility that comes with batting at No. 7, he’s certainly doing all he possibly can to transform into the star all-rounder he potentially could become.