Here’s Looking At Kenya At U19 Cricket WC 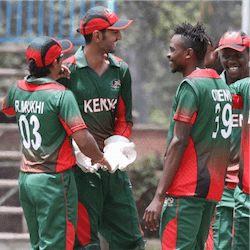 All Eyes On Kenya At U19 Cricket World Cup

The 2018 ICC U19 Cricket World Cup gets underway on January 13th and will be played at a total of 7 venues across New Zealand as it makes its way to the finals.  All eyes are on Kenya this year, who will be competing in a very challenging Group A against the defending champions, the West Indies, South Africa and of course, New Zealand.

Kenyan head coach Jimmy Kamanda has said that he is excited beyond measure that his squad has been selected to play Group A and that he had been given the honour of accompanying the players to New Zealand.

He went on to say that he firmly believed in the talent locked up in the team and that he was confident that they would not only do their country proud but that the correct combination of players had been selected in order to achieve maximum results.

The Kenyan team are all set to depart from Nairobi for New Zealand on December 28th.  They will first play two friendly matches against Sydney before jet-setting off to Christchurch where they will officially commence their World Cup journey.  Their first match will be played against South Africa on January 14th.  Next up will be New Zealand on January 17th and finally, the Windies await on January 20th.

Cricket South Africa has announced that its choice for a captain for the 2018 U19 Cricket World Cup is Raynard Van Tonder.  The 2018 World Cup will be Van Tonder’s third go at leading the squad in a major tournament.  Van Tonder hails from the South African province of the Free State.

The Eastern Cape province will also be represented in the form of batsman Matthew Breetzke.  Breetzke has made his debut for the Warriors and did an excellent job at Youth One-Day Triangular Series where he racked up a total of 238 runs, making him the top scorer for the series.

The only player with previous World Cup experience to have been included in the South African squad is Wandile Makwetu.  Makwetu was part of the 2016 World Cup campaign in Bangladesh.  Thando Ntini, son of Makhaya Ntini, has also been selected for the super-squad.   Ntini plays for the Western Province.

Coach Lawrence Mahatlane shares the excitement of the Kenyan coach at having the opportunity of taking a top squad on a World Cup tour.