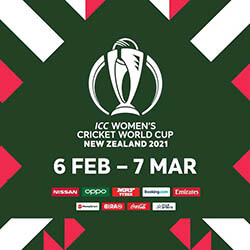 Six cities in New Zealand will be welcoming sports fans from all over the world for the International Cricket Council’s Women’s World Cup early on in 2021 and their names have now been confirmed.

Auckland will be hosting an exceptional opening weekend at Eden Park, after which the focus will shift to games in Wellington, Hamilton, Tauranga, Dunedin, and, finally, Christchurch. The tournament will feature 31 matches taking place between the 6th of February and the 7th of March and will be crowned by a no-doubt-incredible final in Christchurch under the lights at the Hagley Oval Cricket club.

The Semi-Finals will be held at Hamilton and Tauranga, in the Waikato region of the North Island, and the White Ferns will be playing at all the venues, including Dunedin and Wellington.

Chief Executive Officer for the ICC Women’s Cricket World Cup Andrea Nelson stated that she’s delighted to be able to announce the names of the six host cities. She called the Cup a truly national event and said that the organisers’ goal was to make sure that all 31 games would be played at the finest possible venues.

Nelson explained that the team tried to encompass a geographic spread to ensure that as many sports fans as possible will be able to engage with the tournament, and she was amazed by how enthusiastic everyone has been. She said that the bids that had been received were tremendous, and making the final decision was challenging.