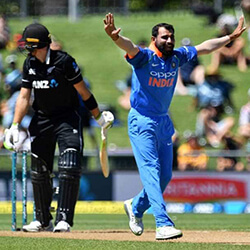 The India versus New Zealand game, the first of a five match day one international series was cut short due to a setting sun in Napier, allowing the Indian team to claim victory for the day.

The sunset at McLean Park was shining directly into the eyes of the batsman, forcing the umpires to stop play with the visitors at 44-1 as they looked to chase 158 to win. There was a half hour delay before the game was resumed. India’s target scored was reduced to 156 from 49 overs and they managed to reach it easily thanks to Shikhar Shawan’s unbeaten 75. The Kiwi team saw defeat due to their batting, with captain Kane Williamson the top scorer of 64, and Ross Taylor was the only other of the team that scored more than 15, which ended his run of six successive ODI half centuries.

Dhawan led his team to victory with the help of Virat Kohli, who claimed 45 of his won. They are now set to play against later in the month at Tauranga.

The Board of Control for Cricket n India has stated that Kohli will be rested for both the fourth and fifth ODIs, as well as the three match Twenty20 international series where they will be playing against the Black Caps. The BCCI in the statement said that considering the workload of the player for the last few months, management and committee members view that it would be best if he received rest.