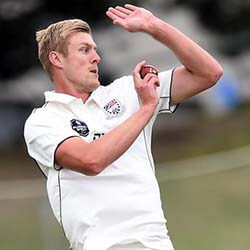 Black Cap Kyle Jamieson has been named Debutant of the Year by Cricinfo as part of the ESPN-owned website’s annual awards. Jamieson has enjoyed a phenomenal first year in Test cricket after appearances for New Zealand in Tests across Pakistan, India, and the West Indies.

The young star in his debut year took 31 international wickets from a total of 16 innings in Tests, T20 games, and One Day Internationals, which included 25 Test wickets dropped at an average of 14.44. The wickets taken by the young all-rounder had been key in catapulting New Zealand to the No. 1 spot in the rankings of the ICC, wrote Cricinfo.

After making his Test debut against India as recently as February last year, at the famous Basin Reserve, Jamieson nearly instantly went ton to become an instrumental part of the Black Caps’ bowling attack. Not only that, but he’s also been a regular champion with the bat, last year averaging an impressive 49 across five Test innings.

Picking up the T20I Cricinfo Bowling Award for Best Performance was New Zealand International Lockie Ferguson. Securing the award had been the New Zealander’s career-best 5 for 21 aced against the West Indies in Auckland.

Other winners of Cricinfo awards for 2020 include: