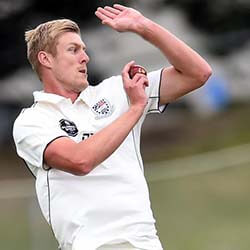 Black Caps champion pace bowler Kyle Jamieson has managed to rack up a second penalty offence in a space of only a couple of months. Jamieson has now been fined 15 per cent of his full match fee earned during Tuesday’s One Day International match against Bangladesh.

The fast bowler also earned a demerit point added to his disciplinary record after he angrily threw his arms in the air during the first innings of New Zealand’s five-wicket victory over their visitors in Christchurch. His irate reaction followed a controversial denial of a caught and bowled by third umpire Wayne Knights, who ruled that Jamieson had in fact not had “full control” of the ball as he hit the ground.

The result was a guilty finding in terms of the breaching of Article 2.8 of the ICC Code of Conduct for Players and Player Support Personnel. The article in question relates to the showing of “dissent” at an umpire’s ruling during a match between two international teams. Since Jamieson had admitted to the offence, no formal hearing had been required.

The offence is the celebrated Black Cap’s second in only a few months, increasing his demerit points to two. He was last year December penalised for a fielding incident that occurred during New Zealand’s first Test against Pakistan in Mount Maunganui after found guilty of having thrown a ball at or near a player in a dangerous manner during an international contest.

The ICC Code of Conduct dictates that once a player has reached four or more demerit points within a 2-year period, they’re automatically banned.