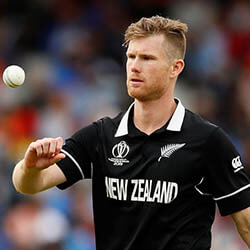 Jimmy Neesham, the star of the Black Caps, has opened up about his distress over how the World Cup played out. He says that he is still constantly reminded about the miserable defeat his team underwent at the final.

England triumphed over the New Zealand team on the 14th of July this year by the smallest of margins in what has gone on to be somewhat of an infamous boundary tiebreaker. And the Black Caps star who appeared during the tied Super Over has stated that it’s taken a while for him to deal with the loss.

Appearing on the Radio Sport Breakfast show, Neesham said that everyone else had been comfortable talking about it quite soon afterwards, some as early as 4 hours after the game. But he took roughly a month to deal with the ignominious defeat and be able to crack a joke or 2 about it.

He described it as one of those things that had you staring at the ceiling after you wake up in the morning in disbelief. He said he’d done that for around 4 weeks and then gotten tired of starting his days like that and made a concerted effort to move on.

After the final, the sports star even took to Twitter to flippantly warn kids off sport because of the emotional havoc it can wreak. Neesham told his followers to avoid sports altogether, advising them to take up baking or something similar, and die at 6o-years old, fat and happy.