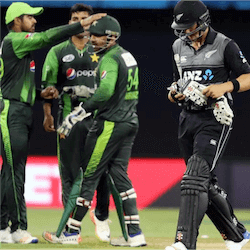 Pakistan surprised all and sundry on Sunday when they sealed the deal on a victory against New Zealand’s Black Caps in the third and final Twenty20 in Tauranga. The win has also afforded Pakistan the top spot in ICC T20 international cricket rankings. It certainly is a far cry from their previous 5-0 loss on the Black Caps’ home soil.

New Zealand has now suffered consecutive defeats after an unbeaten winning streak involving 13 matches across all formats. This is bound to put a lot of pressure on the squad ahead of the upcoming triangular series against Australia and England.

The Return Of Ross Taylor

If anything good came out of New Zealand’s 18-run defeat by Pakistan, then it’s the return of Ross Taylor. It’s now a little over a year since Taylor’s Twenty20 career seemed to be effectively something of the past. But now, the senior batsman is primed and ready to stand out as a key player in the squad that is getting ready to face Australia first up in the tri-series opener which kicks off in Sydney on Saturday.

According to Black Caps coach Mike Hesson, many conversations have been had about what was expected of Taylor in terms of T20. Hesson said that T20 was very much a power game and that Taylor had proved himself able to handle that kind of pressure and deserved to be back in the selection mix.

33 year old Taylor last played a T20 International in March 2016, when New Zealand lost against England in the World Twenty20 semi-final. He is, after all, a man with 360 internationals worth of experience under the belt and will stand out as a key player when New Zealand takes on Australia.

The pitch at SCG remains especially suited to slower bowling, meaning Mitchell Santner and Ish Sodhi will be styling it out with their double act in full force, hoping to take full advantage of the situation. Captain Kane Williamson will no doubt be in the mix to follow through with spin backup.

Hesson said that his team was slightly off and a little bit deflated after the defeat against Pakistan, especially since they were previously on an all-time high after their 13-match winning streak. The coach said that the key to clinch the triangular series would be to play with the type of confidence that they had shown during home-matches.

Good advice from the coach, as going up against Australia will be no easy task, especially considering the presence of Big Bash champions Chris Lynn and D’Arcy Short in the Aussies’ top order.