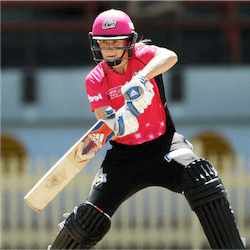 Record Numbers On Weekend 1 Of WBBL

The first weekend of the third addition of the Women’s Big Bash League has attracted record numbers in terms of viewership spectator tallies, with an average of 422,550 fans having booked out for the game between the Sydney Sixers and the Melbourne Stars.  This is officially the largest digital crowd drawn to date for a regular season WBBL match.

This indicates a welcome increase in general interest in women’s cricket, something that is welcomed far and wide by all those involved.  Viewing figures for Day 1 of the competition represent a 46.6 percent increase on the season average.

Physical crowd attendance was also on the up and up, with 8,726 fans having pitched up with tickets in hand at the North Sydney Oval for four of the six games.

Ticket holders were everything but disappointed, with Sydney Thunder having made it all the way and at pace to 6-200, which is officially racking up the biggest score in Women’s Big Bash League history.

The astounding record did not last very long as shortly after, the Sydney Sixers made more of the same magic in their match against the Stars, having tallied it up all the way to a new record score of 4-242.  Best of all, this is now officially the biggest record scored by any BBL team of any gender.

Commentator Mel Jones described Ashleigh Gardner’s record breaking knocks as nothing short of one of the best T20 hundreds ever seen in T20 cricket.  Gardner is, after all, the holder of the highest score in WBBL, with the record for the fastest century to boot, too.

A Day For Records

Ashleigh Gardner’s half-century, tallied up from a total of 22 balls, was officially the fastest half-century scored in the Women’s Big Bash League.  For a while at least, before the short-standing record was equalled by South African Lizelle Lee of the Melbourne Stars.

Speaking to the press, player Elysse Perry said that the quality of the matches played over the first weekend was an absolute testament to the development in women’s cricket over the last year.  She also put it down to most of the players having been full time cricket players over the last twelve months.  This has resulted in their having more time and energy to put into practice and games, which goes a long way towards the kinds of results that were seen over the weekend.