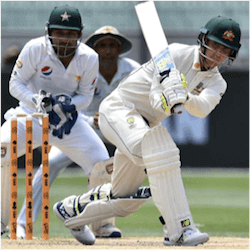 Sheffield Shield Round 2 – The Winners

Round 2 of the Sheffield Shield matches is over and a number of players have come up on top, especially with the Ashes selections in mind.  We take a look at some of the victors and wager a prediction as to what the future may hold.

Starc didn’t only claim a ten-wicket haul against Western Australia last week, he also became the first player in 39 years to manage two hat tricks in the same game.  Starc has an uncanny ability to target the feet of batsmen, instilling fear and absolute panic in lower order batsmen.  Starc is only the third Aussie in history to have performed a twin hat trick in a single game.

There’s no two ways about it: Jake Lehmann delivered a performance that was nothing short of stunning for South Australia against Victoria.  Quite ironic when considering that Lehmann (the son of national coach Darren Lehmann) hasn’t gathered the amount of national attention that one would think.  Instead he has slowly and steadily put together an impressive average and overall record.

Lehmann, now 24, is averaging 41 and with a conversion rate of eight half-centuries to five centuries.  Ironically, Lehmann wasn’t even in the running for selection two weeks ago, but this week’s performance has certainly changed this.  Next week promises to be the big decider.

Maxwell batted in fluent fashion against South Australia, and despite not having capitalised fully on every opportunity he is firmly in the running for test selection.  Maxwell may have fallen after being out-bowled under what seemed like ironic circumstances, but he still got noticed, and that’s ultimately all that really matters in the end.

Callum Ferguson is perhaps the least successful as far as the Sheffield Shield selection stories go.  In many ways forgotten until only recently, Ferguson scored 182 not out against Victoria.  Certainly not a score to smirk at or forget any time soon.

That having been said, Ferguson is unlikely to pass the final selection mainly due to a lagging previous season.  However the situation being what it is with Australia’s struggle to replace George Bailey’s No. 4 ODI spot, Ferguson might actually make the cut eventually if he continues to play in like form.

It may be an opening that will only lend itself to being capitalised on over the next year but if Ferguson were to keep it up it may very well pay off yet.