Stoinis Not Available For Sheffield Shield

Marcus Stoinis Out For Sheffield Shield Round 2 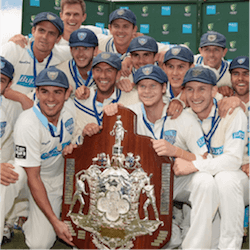 It was announced on Wednesday that Western Australian all-rounder Marcus Stoinis will not be involved in Round 2 of the JLT Sheffield Shield due to personal issues.  Stoinis’ father has been battling serious illness and as such Stoinis has withdrawn in order to spend more time with his father and his family.

Stoinis has played eight one-day internationals and two Twenty20 internationals for Australia.  His absence from WA’s JLT one-day cup final team during last month was for the same reason.

Nathan Coulter-Nile has also been left out of Western Australia’s Sheffield squad in order to lead an invitational elsewhere against Joe Root’s Englishmen.  Coulter-Nile will be replaced by Jason Behrendorff in the Western Australian squad who will be facing New South Wales at the Hurstville Oval.

Coulter-Nile has been waiting for an appointment with the starts for quite some time now and it seems that it has finally arrived.  It has been two years of injuries coinciding with opportunities almost without fail, but it seems like that particular bad run has finally come to an end.  Coulter-Nile was the absolute star of the match against Tasmania when he helped secure a 301 runs victory.  Speaking to the press, Coulter-Nile said that he had been feeling that the time was drawing near to finally “get there” and that it seems that that expectation was now becoming a reality at last.

Behrendorff was himself rested from the first match against Tasmania.  Coach Justin Langer explains that this decision was made as a result of Coulter-Nile’s own recent history of injury spats and that the main aim was to get players back to reaching their maximum potential.

The lack of bowling sufficient overs during the recent Twenty20 tour of India was the main reason for the decision to rest Behrendorff.  The left-armer was said to have been at a substantial risk of injuries and the decision was made to rest and preserve instead of to push and use and face prolonged absence.

Matt Kelly, who played a superb match against Tasmania by claiming five wickets, will also be rested.