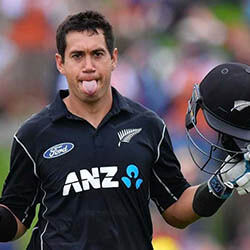 An anguished Ross Taylor paid tribute to the late New Zealand Cricketer Martin David Crowe MBE after becoming his country’s greatest-ever Test runscorer. The two superstars were very close until Crowe perished from lymphoma in 2016, with the Kiwi hero taking on the roles of mentor and sounding board for a young Taylor who was unsure if he would ever succeed in the sport he loves.

Taylor, speaking to New Zealand Cricket after the Test in Sydney, said that his only goal at that time was to play a single Test match. He eventually broke down in tears, saying that the reason he was feeling so emotional was that one of the goals Crowe had had for him was to attain what he just achieved, becoming the highest runscorer in the country. He added that he didn’t believe he could for a long time, is profoundly grateful for the support he received as he kept on keeping on, and wishes only that his dear friend was still here to help him celebrate.

Taylor went on to say that when he first started playing for New Zealand he was enjoying a decent One Day career, but had only scored three or four First Class Hundreds and Twenty20 was just starting. He said that, while he was confident that he could play these formats, he was never sure that he was good enough for Test Cricket. He stated that Crowe was a huge help in his becoming that.