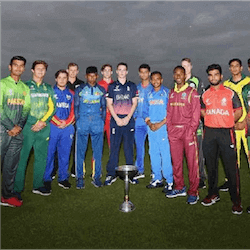 The U19 Cricket World Cup is officially underway in New Zealand.  The event kicked off in style and swag on Monday at the Hagley Oval in Christchurch with a display showcasing true New Zealand culture.  All sixteen participating teams were represented by a player representative and the event was also attended by Christchurch Councillor Aaron Keown and New Zealand’s Cricket President, Debbie Hockley.

The actual tournament commences on January 13th and will be played across the country at a total of seven venues in four cities.  Christchurch, Queenstown, Tauranga and Whangarei will each play host to one or more matches at several of its star venues.

Practice matches commenced in Christchurch on January 8th and will run through to January 11th, allowing teams to find their feet ahead of the official tournament kicking off.

New Zealand Cricket President Debbie Hockley praised the value of the U19 Cricket World Cup, saying that the tournament taught valuable lessons to the young players, including virtues such as camaraderie and leadership as well as imparting tricky skills such as the art of playing when the pressure is really on.

Hockley went on to say that it also instilled the true spirit of the game in young players, which was arguably the tournament’s most important function.

Tournament Director Brendan Bourke also commented, saying that it was the first time that all sixteen participating teams had been represented at the opening ceremony of the tournament, and that for this reason, it was decided that it would be made into a very special opening event.  The highlight of the event was a presentation of the traditional Maori dances.

Excitement In The Ranks

The team representatives, too, were notably excited to be at the ceremony.  Afghan captain Naveen-Ul-Haq confirmed that his team had been in New Zealand for the last two weeks and that they were particularly looking forward to having the opportunity of showcasing their talents on the cricket field.  He said that his team had been enjoying conditions in New Zealand and had been made to feel welcome and at ease.

Australian skipper Jason Sanga agreed but said that his team were now ready to step out of the nets and into the tournament and that they were eager for event to get underway in terms of the competition.  He said that the best part of being fortunate enough to play in the World Cup was that you never knew what was going to happen or where the team would ultimately end up ranking.