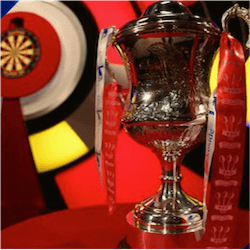 English darts champion Glen Durrant has said that he is completely focused on his upcoming title defence at the BDO World Darts Championship, set to run from January 6th to January 14th.  Durrant is all set to begin defending his World Title against either Gary Robson or Pengiran Mohamed.

The 2018 instalment of the BDO World Darts Championship will be the 41st of its kind and will see 40 men and 16 women battling it out for the various titles presented during the event.  The competition will take place at the Lakeside Country Club in Frimley Green.

Glen Durrant is the reigning champion and is also seeded World No. 1.  Durrant will square it off with the winner of the preliminary round, which will be battled out between three-time quarter-finalist Gary Robson and Pengiran Mohamed.  Mark McGeeney, currently seeded World No. 2, will have his cake and probably eat it with Lithuania’s Darius Labanauskas.

Jamie Hughes (World No. 3) will in turn attempt to stick it to either David Cameron from Canada or German national Michael Unterbuchner.  Other pairs set to square it off include Scott Waites and Ross Montgomery as well as Cameron Menzies and Conan Whitehead.  Menzies recently made a huge impression at the Grand Slam of Darts.

In the ladies’ division it will be defending champion Lisa Ashton who will commence her title defence against Rhian Griffiths of Whales.  Ashton is well known for her strong views on the participation of women in professional darts.

Ashton made headlines at the beginning of the year when she expressed the opinion that women would never be permitted to compete against men in international competitions such as the World Darts Championship due to the fact that men are scared of losing to women.

Ashton said that women in darts were every bit as good as men in darts and that rightfully, no distinctions should be made between the two genders.  Ashton also criticised the immense discrepancy and gap in the prize money awarded to the two sexes.

Ashton was quoted as saying that equal competition between the two sexes would probably never be a reality as men did not enjoy being shown up at their own game.

The pay gap disparity is highly prevalent across the scope of all sports and darts is by no means the exception to the rule.