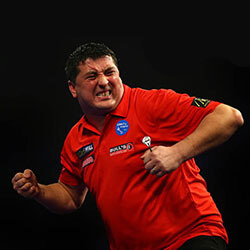 Seventh seeded Mensur Suljovic has suffered a surprise defeat at the hands of world number 61 Ryan Searle for the second round of the PDC World Championship. The Austrian player, who has otherwise enjoyed the best season so far in his career, was ultimately defeated by Searle 3-1 in their game that took place at Alexandra Palace.

Despite Suljovic starting strong with two 180s during his opening two legs, his Somerset competitor proved to be the better player throughout the game. The World Champion debutant took his victory thanks to a brilliant 118 checkout. His reward will be a third-round tie against the Republic of Ireland’s William O’Connor.

Earlier in the day, the 2011 and 2012 world champion Adrian Lewis, who is now currently at rank 16 in the world, managed to ease through thanks to a 3-0 win against Ted Evetts. Speaking to reporters after his victory, Lewis said that he had to dig in deep, and put loads and loads of work in, and that he wanted to put pressure on his opponent from the started. He added that there is still room for improvement, and that he intends to get back on the practice board.

Former BDO champions Stephen Bunting and Steve Beaton will be joining Suljovic’s exit from the tournament. Beaton, a veteran in the scene, and the 1996 BDO world champion, lost to fellow Englishman Chris Dobey 3-0. Bunting, who was the 2014 BRO champion, similarly lost against Luke Humphries 3-1.