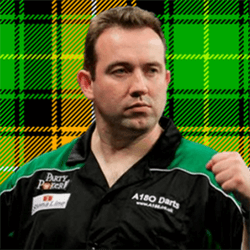 Fermanagh player Brendan Dolan has moved into the third round of the PDC World Championship after beating 14th seeded Joe Cullen 3-0 a the Alexandra Palace.

45-year-old Dolan had won nine legs to Cullen’s one, with the highlight of his game being he maximum 170 checkout. The world number 36 is now set to play first against Mervyn King and Jan Dekker in the final 32 stages of the event.

2011 World Grand Prix runner-up Dolan has never before made it beyond the final 32. He has had six defeats at the stage of the international event, but has yet to lose a set in this year’s tournament, beating Chinese qualifier Yuanjun Liu 3-0 during their first round. His latest 170 checkout, which is the first of this year’s event, came in the sixth leg of the match, and his finish helping him take the 2-0 lead. Bradford Thrower Cullen is a European Championship semi-finalist, and had reached the second round for the second time.

Dolan’s Compatriot Daryl Gurney, who is fifth seeded, secured a place in round three after beating English Ross Smith 3-0. The Londonderry player is now set to take on Jamie Lewis.