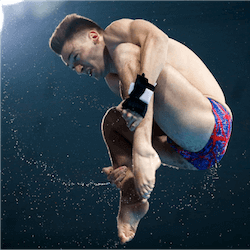 England’s best divers will be making a dash at a spot on the Common Wealth Games team when they take to the water at the British Diving Championships in Plymouth. It will be the winners of the 3m and 10m events that will be right up front when the selection process for Gold Coast officially kicks off. Runners-up for those events will only be eligible for selection for the Common Wealth Games in the event that they meet certain criteria.

The 3m events will also feature two defending champions, in the form of Ross Haslam (City of Sheffield) and Katherine Torrance (City of Leeds).

It’s a big weekend ahead indeed for 12 year old Euan McCabe, who will be making his senior debut at the British Diving Championships.

McCabe completes his training at the same club where Tom Daley once began his pro-diving career and it’s clear that McCabe is trying his best to follow in the huge footsteps of his hero. McCabe will officially be the youngest diver competing in the 10m event.

Plymouth Diving head coach Alex Rochas is of the opinion that McCabe is more than ready to compete against the big fish. Rochas said that it was a huge opportunity for the youngster to prove what he was capable of doing. He also said that for McCabe, it was all about getting the new experience under his belt and learning to do his best when the pressure was turned on.

McCabe follows in the footsteps of not only Tom Daley, but also of European champion Sarah Barrow, Commonwealth Games medallist Tonya Couch, as well as international divers Victoria Vincent and Matthew Dixon.

For McCabe, diving has been a long time coming. He started diving at the tender age of 5, but his talent only came to full fruition about 3 years ago. Speaking to the press, McCabe related how he used to be all the way down in the bottom of the group when he was a young boy, but that as he got older, he started to climb the ranks and was now nearer to the top end.

McCabe hopes to one day compete in the Olympics.

Meaghan Benfeito and Caeli McKay from Canada managed to capture a bronze medal for their performances in the women’s 10m synchro at the FINA Diving World Cup. It was the first world cup for both the Canadians, which could be seen as they made their way over to the podium ….