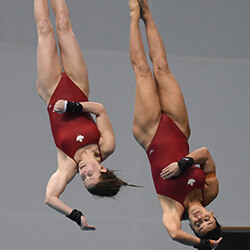 Meaghan Benfeito and Caeli McKay from Canada managed to capture a bronze medal for their performances in the women’s 10m synchro at the FINA Diving World Cup.

It was the first world cup for both the Canadians, which could be seen as they made their way over to the podium to accept their bronze.

Not only did they claim a medal, but their place at the end of the event grants them automatic access to the FINA Diving World Series, which is the elite series of the sport.

In the men’s 3m springboard, Francois Imbeau-Dulac finished 10th after qualifying for his first World Cup final. Philippe Gagne, from Montreal, finished 14th in the semi-final, but did not advance any further.