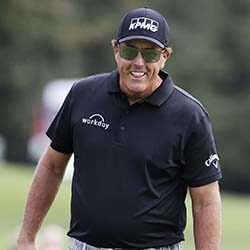 The big win saw the 50-year-old interrupt a two-year drought on the PGA Tour. He’s also now the oldest player ever to have won a golf major. His stellar victory came off a one-over 73 on the final day, which catapulted the golfing legend to a two-shot victory.

Commenting on his recent milestone win ahead of the Charles Schwab Challenge in Texas, Michelson reminisced about his incredible journey back to the top, saying he’d been incredibly impressed by Ko’s determination and tenacious drive for not allowing losing streaks to stand in her way of keeping on trying to reach her personal and professional goals.

Ko’s own protracted losing streak finally came to an end in April, when the New Zealander won LPGA’s Lotte Championship.

Mickelson said in his commentary that every golfer endures several struggles over the course of their career, with Ko being a prime example of being on top, then struggling, then climbing her way back up again. He said the way the New Zealander has been going about her journey acted as a true inspiration for his own journey back into the winning circle.

The pro-golfer also added two more fellow-players to his list of inspirations – saying Jordan Spieth and Stewart Cink had both featured as driving forces to the 103rd PGA Tour Championship victory.

Before Mickelson’s massive win on the weekend, he’d made 14 PGA starts without a single golden finish.