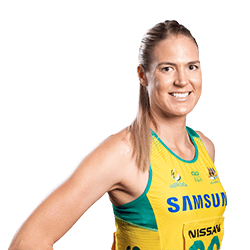 Word on the street is that Australian netball skipper Caitlin Basset, in an attempt to keep her professional career alive, is eyeing New Zealand’s 2021 domestic competition.

Having only played a single game out of four in recent Super Netball games for the Giants, Bassett is now forced to look to alternative avenues with a view on next year and the future. Bassett’s gameplay hiatus has reportedly been the result of Aussie netball coach Julie Fitzgerald’s decision to play instead shooting duo Keira Austin and Jo Harten under the sport’s “super shot” rules.

Since super shot play awards points for shots taken from the outer portion of the goal circle during the final five minutes of each quarter played, Bassett’s strong close-ranged shooting prowess now quite unexpectedly has her playing fewer and fewer games.

All of which makes the anticipated Kiwi move a sensible one – especially in the event of super shot sticking around for another Tasman season. Also, the Australian captain, even if she ends up playing in new Zealand, will still remain eligible for Aus selection in such an event.

Netball New South Wales chief executive Carolyn Campbell has in the meantime confirmed the association having had positive discussions with Bassett, and added that the industry very much respects that every player should be allowed and supported to do and pursue whatever it is they feel strongly about wanting to achieve.

Some players have taken to the rules of super shot, said Campbell, while others yet are struggling to adjust.