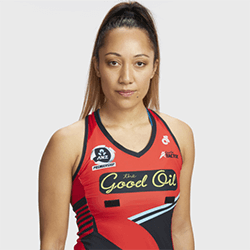 Tactix star midcourter Erikana Pedersen is no stranger to battling the demons of post-injury depression. And since last year’s misfortune is now a thing of the past, Pedersen says she feels ready to help others who may be dealing with similar challenges.

The year to trump all others in terms of misfortune played its first tricks only four minutes into Pederson’s very first game of the 2019 netball season. Little beknown to the midcourter at the time of her sudden collapse, she had in fact torn an anterior cruciate ligament. Needless to say – every professional netball player’s worst nightmare had suddenly and unexpectedly befallen Pederson. The Silver Fern couldn’t do much more than to hobble off the court assisted by Magic opponent and New Zealand team compatriot Casey Kopua.

The injury, says the NZ-born Fijian now looking back, could not have come at a more inopportune time. She was after all only 4 months prior to the devastating injury selected to play for New Zealand in the Constellation Cup. Her Silver Ferns moment had finally come, and she was more than ready to step up to the international plate.

Suddenly crushed by the realisation that her injury was about to keep her from joining her beloved Silver Ferns for the 2019 Netball World Cup in Liverpool, Pederson could do no more than to heed the advice of her workmates at Performance Physio in Christchurch, which was to religiously ice her knee and work out using the center’s stationary bikes.

But overcoming the physical injury, Pederson would soon realise, was nothing compared to overcoming the ensuing depression. Even so, its what the star athlete learned during that difficult time, that is the driving force now steering her toward an exciting new career in psychology.