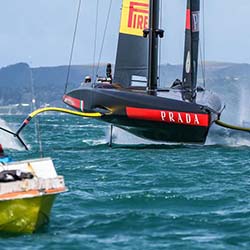 The copyright fight over graphics designed for live America’s Cup racing broadcasts may not be over yet. The battle between New Zealand businessman Sir Ian Taylor and sailing legend Sir Russell Coutts now appears to be ongoing, despite former claims of an amicable agreement.

Two companies belonging to Coutts, SailGP and Oracle Racing, filed copyright infringement claims against Taylor’s Animation Research Ltd (ARL) and two more companies late last year. The claims relate to graphics reportedly designed and created by ARL for live America’s Cup race-broadcasts. Taylor however shortly after rejected the claims, claiming he, and not ARL, holds the copyright to the technology.

Also refuted by Taylor is the validity of a statement reportedly released late last week by a spokesperson for Coutts, which statement claims that the copyright dispute between the relevant parties to the fight has been resolved by way of an agreement. The statement even went as far as to provide specific details regarding the resolution – including that Riedel Communications and Circle-O have both agreed to pay certain IP licensing fees, and are now looking forward to a future of continuing to work alongside SailGP.

Taylor has responded to the statement by saying that ARL had not agreed to any concession or new agreement and/or arrangement, and that his company representatives had not even as much as seen the agreement referred to by the Riedel Communications.

The dispute relates to graphics showing the defining borders of the racecourse, lines drawn on the water, and numbers indicating distances between the various objects.

New Zealand sailing legend and sports veteran David Barnes has died. Barnes, who faced severe challenges over the past decade as he valiantly continued to battle multiple sclerosis, passed away on Friday. He was only 62. The Kiwi sailing phenomena during his time sailing with Hamish Willcox in the 1980s ….

The America’s Cup competition is now more than just simulations and plans, with Team New Zealand launching the world’s first AC75 ship. The Kiwi defenders put the first of their two full-scale race boats on the water, bringing plans, designs and modifications to fruition. The ship, dubbed Te Aihe, is ….