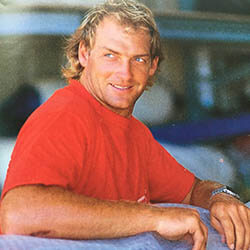 New Zealand sailing legend and sports veteran David Barnes has died. Barnes, who faced severe challenges over the past decade as he valiantly continued to battle multiple sclerosis, passed away on Friday. He was only 62.

The Kiwi sailing phenomena during his time sailing with Hamish Willcox in the 1980s won an impressive trifecta of 470 world titles. Following his stint alongside Willcox, he went on to compete in six America’s Cup competitions between 1985 and 2003. He also appeared at the helm until the very last states of the 1992 campaign.

Fellow New Zealand sailing champion Hamish Willcox, who first teamed up with Barnes in 1980, says he remembers the legendary helmsman as a mindful and strategic athlete, and a man forever relentlessly trying to push the boundaries of both technique and technical approach. Willcox and Barnes were the first Kiwis to win an Olympic world title in sailing.

Barnes formed part of a show of sailing sportsmanship that saw New Zealand grow into a 470 world-title powerhouse in the 1980s – alongside talents the likes of Willcox, Chris Dickson, Murray Jones, Peter Evans, Joey Allen, Peter and Terry Nicholas, and Dave Mackay.

Aside from his astounding sailing brain, David Barnes will also be remembered for being naturally in-tune with the boat, said Willcox in memory of his former teammate. He was according to Willcox a master of sailing the boat successfully in light airs, and one of only a few New Zealanders able to pull of this particular feat.

Barnes was a committed family man and is survived by wife Karen and the couple’s three children.

The copyright fight over graphics designed for live America’s Cup racing broadcasts may not be over yet. The battle between New Zealand businessman Sir Ian Taylor and sailing legend Sir Russell Coutts now appears to be ongoing, despite former claims of an amicable agreement. Two companies belonging to Coutts, SailGP ….

The America’s Cup competition is now more than just simulations and plans, with Team New Zealand launching the world’s first AC75 ship. The Kiwi defenders put the first of their two full-scale race boats on the water, bringing plans, designs and modifications to fruition. The ship, dubbed Te Aihe, is ….