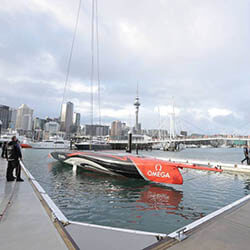 The America’s Cup competition is now more than just simulations and plans, with Team New Zealand launching the world’s first AC75 ship. The Kiwi defenders put the first of their two full-scale race boats on the water, bringing plans, designs and modifications to fruition. The ship, dubbed Te Aihe, is scheduled to undergo strenuous testing at Waitemata Harbor in the months ahead as Team New Zealand looks to get a grip on the hulking yacht, and will start making refinements to their brand new vessel.

Team New Zealand is the first of five teams to introduce their first full-scale prototype for the 2021 tournament, with INEOS Team UK, Luna Rossa and American Magic all anticipated to follow suit in the weeks to come, while Stars and Stripes Team USA – a late registration – still have a lot of work left to do. While several other teams collaborated on scaled-down AC75 layout designs, Team New Zealand work solely using computer-based simulations. The coming months could be among the most significant in the promotion of Team New Zealand as the team works to solve any problems as they prepare their second ship, all while planning to participate in next April’s first America’s Cup World Series case in Sardinia.

Team New Zealand sailor Glenn Ashby said the team had classes to be validated both in the next few months on board the full-size. chief executive Grant Dalton said it had been a little bit emotionally stressful watching the ship enter the water for the first time.

The copyright fight over graphics designed for live America’s Cup racing broadcasts may not be over yet. The battle between New Zealand businessman Sir Ian Taylor and sailing legend Sir Russell Coutts now appears to be ongoing, despite former claims of an amicable agreement. Two companies belonging to Coutts, SailGP ….

New Zealand sailing legend and sports veteran David Barnes has died. Barnes, who faced severe challenges over the past decade as he valiantly continued to battle multiple sclerosis, passed away on Friday. He was only 62. The Kiwi sailing phenomena during his time sailing with Hamish Willcox in the 1980s ….