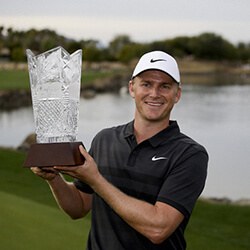 Adam Long, currently at world number 417, birdied during the final hole and earned his maiden PGA Tour title thanks to a one-shot win while playing at the Desert Classic, held in California.

Three shots behind the lead overnight, the 31 year old American golfer, who is playing his sixth tour event, carded a seven under par 65, bogey-free, and finished on 26-under.

Phil Mickelson was leading the event, and had been in the number one spot since a 60 during the opening day, and was two shots ahead as he entered the opening round. But he missed a few short puts in his 89 and tied for second with Adam Hadwin. Hadwin pitched well, and was only a few inches from the hole at the 11th, which created the sixth birdie for the day and had the Canadian three shots clear while he played on the Stadium Course at La Quinta Country Club.

But Long clipped in from the side of the green at the 16th, claiming his sixth birdie for that day and joining Hadwin at 25 under. Despite missing a few more putts and not playing at his best, Mickelson shot consecutive birdies and made all three players level, with two holes remaining.

On the par four 18th, Mickelson attempted a long-range effort that curved extremely wide of the cup, and not long after Long rolled in a 13 food putt and took the title for the tournament.