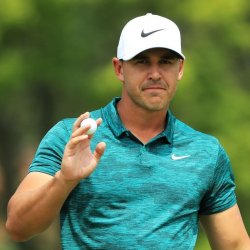 Defending champion Brooks Koepka finished the first round of the US PGA Championship with an incredible seven under 63 while playing at the Bethpage Black Course. The American, who is playing alongside Tiger Woods, carded a total of seven birdies and is sitting one space ahead of world number 199 Danny Lee.

British Tommy Fleetwood finished in third place, while Woods, who is playing his 16th major, finished on two over. Rory Mcllroy of Northern Ireland claimed his only birdie on 18th to match Woods by the time the first round had come to an end. But it was an otherwise difficult round for the 30-year-old player – who had won the tournament for both 2012 and 2014 when it was the fourth and final major of the year – with this year being the first that it has switched to the second.

Woods, who won his 15th major at the Masters in April, had an otherwise mixed day, where he started with a double bogey on the 10th hole, which was his first, before adding one more on the par three 17th. Despite this, the 43-year-old player birdied both the first and second holes before a 25-foot putt for an eagle on the fourth hole that moved him to one under. But another three bogeys left him none shots behind Koepka, who finished with a round free of bogeys, and who is currently aiming for double-digit victories.