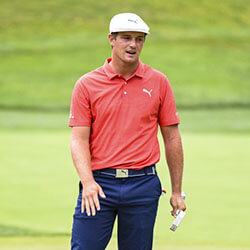 American Bryson DeChambeau has earned his fourth title in nine events after winning the Dubai Desert Classic by a total of seven shots, and claiming a tournament record of 24 under par.

English Matt Wallace closed with back-to-back birdies, and finished second in the event.

Fellow countrymen Paul Waring and Ian Poulter were both given card for the final day rounds of 64, and finished in third place to tie with Spanish Sergio Garcia and Alvaro Quiros. Chinese defending champion Haotong Li was also a part of the group that finished the event on 16 under par. But DeChambeau, who is currently world number five, dominated the event after starting his day one stroke clear, and then went on to add rounds of 66, 66 and 68 with en eight under par 64, which also included seven birdies as well as an eagle.

The 25 year old player finished his 2018 campaign with three titles from PGA Tours in just under four months, winning the Dell Technologies Championship, the North Trust, and the Shriners Hospitals for Children Open events, before going on to take his first European Tour title in Dubai.

Talking about his win, DeChambeau said that it was incredible to get his first victory overseas while playing on the European Tour. Irish Shane Lowrey was only ten shots off of the pace at 14 under, while Matthew Fitzpatrick finished a strike back alongside Tommy Fleetwood.