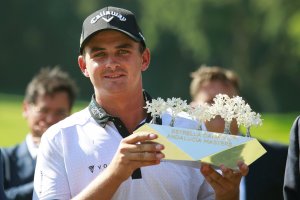 South Africa’s Christiaan Bezuidenhout wins first title after his victory at the Andalucia Masters played in Valderrama. His first European Tour title has also secured him a place at the Open, which is set to start at the end of July. The 25 year old was originally banned from the sport in 2014 after he had failed a drugs test while at Royal Portrush, with the player saying that he had been on anti anxiety medication at the time.

He had been taking the beta-blockers after he developed a stutter following an accident where he drank rat poison at aged two. The South African player earned his European Tour card through a qualifying school in 2017 after he had served a nine-month ban which had been ultimately shortened from two years.

While playing in Spain, he had survived a mid round scare and cruised to a six shot victory from favourite Jon Rahm, along with Spaniards Alvaro Quiros, Adri Arnaus, and Eduardo de la Riva. He also beat French Mike Lorenzo Vera, with tournament host Sergio Garcia finishing the event a shot back.

Bezuidenhout, who had been surprised by family members on the 18th hole, told reporters that he is proud of himself for hanging in after a tough stretch during the middle of his round. Any Sullivan proved to be the best of the British challengers, and had finished on one under, while Jack Singh Brar and Steven Brown ended on level par.