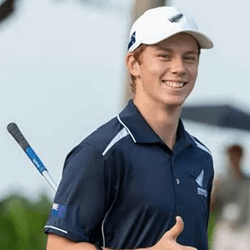 Top amateur golfer, Daniel Hillier, from New Zealand, has turned professional and will compete alongside a compatriot and major winner in his first paid ranks competition. Hillier will join the 2005 U.S. Open Champion and Wellingtonian colleague Michael Campbell in the field for the $3.38 million KLM Open European Tour in Amsterdam beginning Thursday, according to the entry list of the tournament. Previously ranked on the world amateur lists as high as No 13, the Manor Park club’s 21-year-old switched pro last week, it’s recently been revealed.

His choice coincided with a fantastic show at the Players Club in Bristol, UK, at the first level of the European Tour’s qualification school. Hillier produced his significant US Open debut in June, entering Pebble Beach through a qualification tournament and playing a training round with iconic Ernie Els. This week, after returning to the full tour, Campbell will be a familiar face, having eased his way back thanks to some senior tour events. In last week’s European Open in Hamburg, Campbell had rounds of 78 and 74, avoiding the cut, while fellow countryman Ryan Fox completed 60th on five-over, 19 shots behind champion Paul Casey.

Fox is not mentioned in the Netherlands tournament listings. Meanwhile, Josh Geary from New Zealand is on the brink of winning his complete European Tour ticket as he lies inside the top-15 on the moneylist of the secondary Challenge Tour, having finished second in France last weekend to move up to 12th.