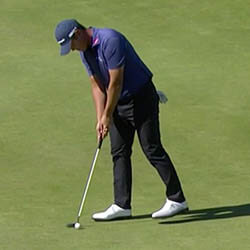 Kiwi U.S. Open golfer-contender Danny Lee is starting to run a serious risk of ridicule after yet another quitting stunt pulled on Sunday following a disastrously poor six-putt performance played on the final hole at Winged Foot. And as for the excuse this time round – a supposed injury sustained to the wrist. The fact that the most likely cause for the so-called injury would have been the impact caused by a putter being angrily smashed into a bag has out of only pure gentlemanly decency not yet outright been put to him in person.

But whatever the actual state of the young golfer’s forearm, the fact that he’s failed to complete an unfathomable 15 tournaments during his comparatively short pro-golfing career is fast turning into an elephant in the room about to be exposed for all that it really is. Not only is Danny Lee being tagged a “quitter” and a sore loser, but his name is now one with increased frequency one mentioned in conversations going along the lines of “waster of a perfectly decent berth”.

His 11 withdrawals and 4 disqualifications include: