Finks Dream Comes True Teeing Off With The Pros 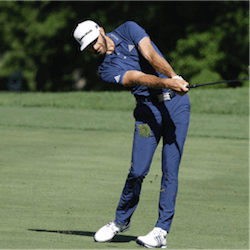 Steve Fink, a member of the Southern Nevada Golf Association, will be making a long-standing dream of his come true when he tees off on Thursday at the Salem Country Club, in Peabody Massachusetts, in the US Senior Open Golf Championship.

Steve Fink, at 60-years old, managed to shoot 72 at a regional qualifying event earlier this month in Temecula’s Bear Creek Golf Club, in California, and, as a result, went on to finish as the 1st alternate. This former golfer for the UCLA saw his spot secured in the 151-player field when both Dave Eichelberger and Steve Stricker had to withdraw last week.

The Only Southern Nevada Amateur that Qualified

Fink is the only amateur player from Southern Nevada area that managed to make it through, and he will be joining local pro players Tommy Armour III, John Riegger, Jeff Gallager, and Jeff LeMaster on the course on Thursday.

Fink has referred to his qualifying as an alternate reality, and stated that it is unbelievable. He added that it was a long-held dream of his to play inside the ropes with the top players in the world, and that those which he was joining were legendary.

The fantasy week that Fink has just spent included a practice round on Tuesday with amateur Chip Lutz and pros Billy Mayfair and Tom Kite.

Fink mentioned the game with Tom Kite with particular enthusiasm, describing him as a perfect gentleman with an extraordinary golf swing. He added that Mayfair’s ability with how far and how high he hit the ball was astonishing.

Fink managed to build up a little confidence during the last part of the round, and thanks to an afternoon of practice with former teammates from college, Tom Pernice Junior and Corey Pavin.

He said that he was feeling wonderful, and, although he didn’t want to jinx himself, he felt confident that he could handle the course. He stated that he was happy with his putting, and that this was very important, and that he felt he was an adequate chipper. He added that his expectations and goals for the game were going to be the same ones he had when he participated in the qualifier: grinding as hard as he could, and finding a birdie here and there.