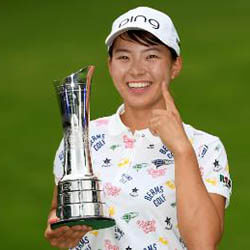 Japanese Hinako Shibuno claimed a birdie for the last hole to steal a stunning win in the Women’s British Open, played at Woburn. Shibuno, who is 20 years old, was leading two shots overnight, but was caught by USA’s Lizette Salas for a thrilling final round.

Salas fired the lowest round for the week, which was a seven-under-par 65. But Shibuno had five birdies on the back nine to win by one shot in her first major. England’s Charley Hull along with Bronte Law both slipped out of contention with rounds of four and six over respectively.

Salas ended the match on 17 under and was practising putts for potential play off while Shibuno approached the 18th green, as both waved and smiled on either sides of the fairway. The rookie player, not only playing in her first major but also appearing outside her home country for the first time, showed no nerves as she struck an 18ft putt, which hit the back of the hole and dropped to secure victory.

Aiming to claim her third major for the year, South Korean world number one Ko Jin-young carded a six-under 66, but that was only enough for third place, and she was two shots behind Shibuno, with American Morgan Pressel one shot further back.

After mostly unknown for her arrival in England last week, Shibuno has earned a host of fans with her cheerful smile, which remained even after a four-putt double-bogey on the third hole.