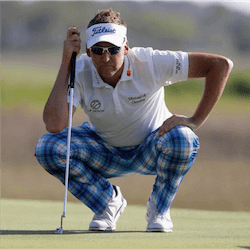 Ian Poulter is hopeful that the return to the venue set to host the Ryder Cup next year will help spark a rise in the world rankings for him. This could mean he would play 7 tournaments one after the other over the summer.

Poulter has not once missed the cut in a total of the 11 appearances that he has made at the HNA Open de France at Le Golf Nation which is hosting the biennial competition between the United States of America and Europe in September 2018.

Poulter Needs to Deliver to Claim His Place

The 41-year old player was placed in 3rd in both 2006 and 2009, and came 4th in 2012, and will need to deliver as good performances in his next 3 starts if he wants to claim one of 9 possible places at Royal Birkdale by means of the Open Qualifying Series.

Poulter Needs to Get Into the Top 50

Making a move to the Top 50 world rankings, from his current position at 81, would also be able to secure him a place at the WGC Bridgestone Invitational just ahead of the last Major of the year, the US PGA Championship set to take place at Quail Hollow.

Poulter Puts Preparation as a Priority

Poulter has said that he has spent many weeks at home resting and preparing in order to get ready for the upcoming series of events, and that he felt they were very important. He went on to state that this week was one in which he had managed to perform well in the past, adding that he had some excellent finishes in France previously, and that he hoped that this would once again be the case in the upcoming week.

He said that he has put his sights on playing good golf over the next few weeks, and that the rest he has undertaken was in preparation for what would hopefully be a long schedule in the summer. If he is able to perform the way he wishes to, in the French, Irish, and Scottish opens, that would allow him to make his way into the Open Championship as well, which would be 4 in a row. The Canadian Open would make it 5, and, should he manage to reach Top 50 World Rankings, the WGC would be the week after that, and then the US PGA would round off the gruelling schedule.