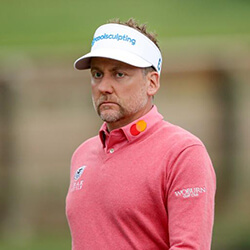 Ian Poulter is the latest in a series of high profile European Tour players that have committed to taking part in the upcoming 2019 Irish Open. 43 year old Poulter will be joining major victors Louis Oosthuizen, Padraig Harrington, and Danny Willet at Lahinch. Team mates from the Ruder Cup Lee Westwood and Tommy Fleetwood are also expected to be part of the tournament, which is to be hosted by ex captain Paul McGinley.

Former host Rory Mcllroy is expected to miss the event this year as he prepares for The Open, which will be played at Royal Portrush two weeks after the Irish Open. Talking about his commitment to play, Poulter told reporters that it is going to be a great tournament with McGinley supporting the event. He continued by saying that Paul is a good friend of his, ad that he’s known him for a very long time as both Captain of the Ryder Cup and as a friend.

The inclusion of Poulter, who is currently number 26 in the world, means that four of the European Tour’s Race to Dubai top five will be competing against each other at the County Clare links course, and will be joined by Shane Lowry, Justin Harding, and Oosthuizen. Poulter, who had finished in 12th place at the Masters, played in the Irish Open of 2017 in Portstewart, but his last appearance in the Republic of Ireland was during the 2006 tournament.