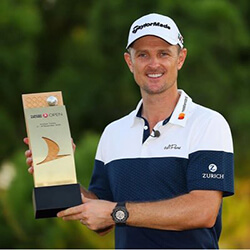 Roses managed to card five birdies in a consistent display of skill to finally take a one-shot advantage after 16 holes during the final round at the event held in Antalya, but bogeyed the 17th hole and slipped back to sharing the first place with leader Li.

The situation didn’t improve for either the next day as lacklustre putts from both players saw them both finish 17-under after 72 holes. The players then returned to the 18th hole for the play-off, not long before Rose missed a 15-footer for birdie, and Li putted from just nine yards to hand his opponent the win, much to the surprise of the onlookers.

Li told reporters after the event that it was a tough day for him, and that although he had played well for the entire week, he failed to hole a few putts in the last rounds and that cost him the title.

It’s the first time that Rose has successfully defended a title in his career, and it has moved him above American Brooks Koephka as the world’s new number one. Rose told reporters that it was good to be back at the top position, who had only held the number one title for two weeks during September. Adian Otaegui and Thomas Detry finished with rounds of 65 to share third place.