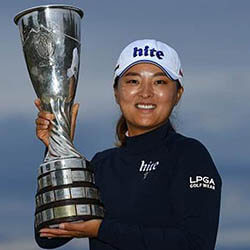 South Korean Ko Jin-young has continued her incredible season after claiming her second major win of the year with a two shot victory while playing at the Evian Championship. 24 year old Ko saw her first major success come from the ANA Inspirational, and was able to add another with a final round of 67 during a wet Evian-les-Bains end, finishing 15 under.

Ko is currently leading the LPGA Tour for thus year, after having won another title and posting seven top 10 finishes. Overnight lead Kim Hyo-joo ended the game two shots back after a two over 73;. World number one Park Sung-hyun, who was trailing Kim by a single shot going into the final round, which as played in France, finished five shots behind Ko after a number of errors saw her end on 75.

Kim, who is was the champion for 2014, sunk birdies on both the eighth and the 11th, and wiped out a bogey for the third, helping her stay ahead of the rest of the players. But she had some problems while the ball was plugged into the bunker on the part three 14th, and left with a tripe bogey six which gave Ko the chance to take control of the lead. Ko, who s world number two, moved with a shot of her counterpart with birdies on six and seven, and then gained more on 10 and 13, giving her the chance to overtake her playing partner.