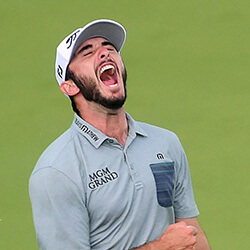 Max Homa, world number 417, has won his first PGA Tour title thanks to a three shot victory at the Wells Fargo Championship. The 28 year old American player, who is in his third season of the tour, started the day sharing the lead with Joel Dahman and Jason Dufner at 11 under. He only dropped a single shot in a round of 67 to finish 15 under. Justin Rose completed his game with a 68 and was third on 11 under, while Rory Mcllroy, who was two back overnight, was eight behind for the tie of eight place with 73.

Homa claimed hiss third birdie for the day and opened a two shot lead at the 10th, which would soon become three when shared first round leader Dahman, who is 31 and also seeking his first PGA title, dropped his second shot in three holes. The lead then increased to four when Homa shot an incredible iron to five feet for another birdie at the 11th. Homa’s previous best finish was tied for sixth during the 2015 Sony Open.

And before he was able to make an attempt at a five-foot par putt on the 14th, a hail storm broke out and forced the players off of the course. It caused a 62-minute delay, but once they were playing again, Homa calmly holed a putt in the late afternoon, with Rose claiming three birdies in four holes around the turn, setting the target.