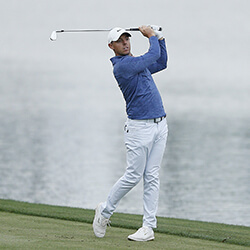 Rory Mcllroy started his campaign for a third Wells Fargo Championship title with a five under 66, ending the first day to share the lead with American Joel Dahman. The world number four from Northern Ireland birdied six for his final nine holes while playing at Quail Hollow in North Carolina. Scottish Martin Laird, who was an early stared from the 10th hole, carded a total of six birdies and currently shares second place.

Justin rose, world number two, took a 41-foot birdie putt during his time on the opening green and returned a one under 70. Mcllroy, who will be turning 30 soon, had some trouble getting off the tee for the first part of his game, quickly finding the water at the seventh and dropping his only shot for the day. But he made a quick comeback and played some good shots on the back nine, which included an approach from the rough side close to the flag for a birdie at the 11th.

For the 493 yard par four 16th, which is beginning of the famous Green Mile closing three hole stretch, a massive shot down the fairway was immediately followed by a wedge, which led directly to a third successive birdie before he took the lead. Not long after, he shot a drive of 366 yards for the last, and then a wedge from 135 yards that gave him another birdie chance, but a six foot putt slid to the left.