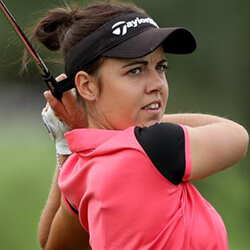 British Meghan MacLaren claimed a round of 65 to finish one shot off of the lead at the Jordan mixed Open – one of the few tournaments that sees women and men compete against each other for the same first prize, for the first time.

The event will included a number of pros from the Ladies European Tour, the senior’s Staysure Tour, and the European Challenge Tour. 23-year-old MacLaren, who has in the past spoken out against gender pay disparity earlier in 2019, is currently the only woman in the top 10.

Talking about the event, MacLaren stated that the girl’s standard of play would eventually begin to show. In the new event, the trending male players of the Challenge Tour will face a 7,100-yard course, while the over 50s from the Staysure Tour take on 6,601 yards, and the female players 6,139 yards. MacLaren claimed a seven under par opening round, and is sharing second with Jack Senior, while Dutch player Daan Huizing is one shot in the lead.

Scottish husband and wife duo Scott and Kylie Henry are three shots apart with another two rounds left, with Scott in the advantage at one under. MacLaren continued her statement by saying that given everything she had talked about over the past few months, it’s nice for finally back it up, but that she didn’t want to add any extra pressure to herself, adding that she’s happy that she’s able to play against the guys.