Mixed Golf Event To Be Hosted In Sweden 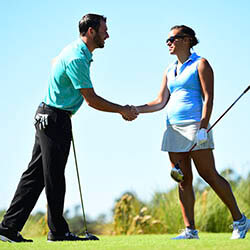 Men and women will have the chance to compete against each other for a trophy at a new event that is set to be hosted by golfers Henrik Senson and Annika Sorenstam next year. The Scandinavian Mixed is a brand new co-sanctioned event that has been given the green light by the European Tour and Ladies European Tour and will feature a total of 78 men and 78 women. With a total prize find of 1.5 million Euros, the winner will also have it count toward their world rankings. It’s set to take place in June next year, and will be held at Bro Hof Slott, located in Stockholm.

Along with counting toward overall world rankings, Ryder Cup points and Race to Dubai points will be available to the male players, while female players will have access to Order of Merit points. Sorenstam, who had retired from professional golf in 2008 after claiming 10 majors, stated that she is delighted to be hosting the Scandinavian Mixed along with Henrik in Sweden for the next three years. She added that brining men and women together in a combined tournament is exciting for fans in Sweden and for the global game as they continue to show that golf is a game aimed at everyone.

Women compete against men at the GolfSixes event, while women’s tournaments run in tandem with men’s events at the Trophee Hassan in Morocco, but this is the first time they will compete against each other.