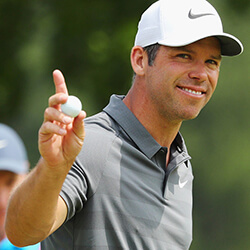 Paul Casey has become the first man to retain the Valspar Championship title after a thrilling final day in Florida. 41 year old Casey who was leading by one overnight by dropped three shots during the opening nine as the other players continued to apply pressure.

The English player was on level playing ground with Jason Kokrak with eight under on the 29th hole, but the American’s bogey saw Casey needing a par four at the last in order to claim the win. He found a bunker straight off tee, but managed to hit the green from there, and went on to two putt for a first win since his victory last year.

Talking about defending his title, Casey stated that it felt cool, and that it was messy but the course was difficult an he did make some errors, and that it was hard work considering all 72 holes. Casey’s latest win means that European golfers have won three past three PGA events, and follows on from Rory Mcllroy’s victory at the Players Championship,  as well as Francesco Molinari winning at the Arnold Palmer Invitational.

The Briton was just one clear of Dustin Johnson, who is currently the world number one, as they went into the final round, but the American was on poor form, and dropped shots on both the third and fourth holes in a three over par round that saw no birdies, with South African Louis Oosthuizen proving the greater challenge.