Phil Mickelson One Shot Off Lead 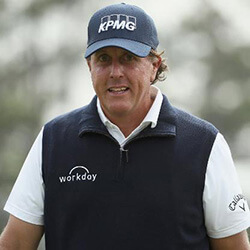 Five time major champion Phil Mickelson carded six under 65 and shared second place after the opening round of the AT&T Pebble Beach Pro-Am, which took place in California. The 48 year old, who is number 29 in the world, claimed five birdies on the back nine at the Monterey Peninsula Shore Course. He dropped only one shot for the opening round while playing at the Peninsula.

Jason Day finished the day with a 65, while world number 155 Brian Gay shot 64, along with 285th ranked Scott Langley. Northern Irishman Graeme McDowell is four under after he shot a bogey in the final hole at Pebble Beach.

Mickelson, who was the runner up to Adam Long during his game at the Desert Classic, missed the cut to enter the Phoenix Open, which started recently. Despite this, he hit all 13 fairways for the first time ever in a PGA Tour since the Farmers Insurance Open in 1998.

English player Tommy Fleetwood, who is now world number 14, ran a triple bogey seven while playing at the 13th hole as he was on route to a 73. Fellow compatriot Paul Casey brined the final two holes at Pebble Beach, and returned to a three under for his opening round. The players are set to play at Monterey Spyglass Hill, and Pebble Beach over the first three days before the start of the final round, which will take place on Pebble Beach.