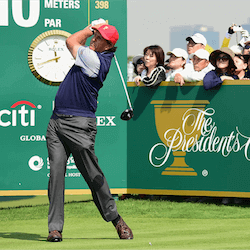 Both captains revealed that their selections had been absolutely unanimous, and a team’s choice.  Stricker had in fact gone the route that many had predicted he would.  Names such as Brian Harman and Gary Woodland had also been on the cards, but in the end, only two could make the ultimate cut.

Charley Hoffman is the logical choice for the US – being the highest-ranked player in the current Presidents Cup standings, outside of the top 10 automatic qualifying players.  Mickelson, in turn, boasts the most impressive resume.

Mickelson is a 5 time major winner and a Ryder Cup stalwart and the 47 year old player has competed in every single Presidents Cup since 1994.  In June of this year, he parted ways with long-time caddy Mackay.  This ironically seemed to have a renewing effect on Mickelson’s game – having played a very listless game since the beginning of this year up until last week’s Dell Technologies Championships – where he played with fresh focus and absolute vitality.

Charley Hoffman, quite by contrast, has never played in the Presidents Cup.

The US has not lost the Presidents Cup since 1998.

The Matter Of Maintaining A Record

Michelson’s selection means that he will not only be maintaining his record for having played in every single Presidents Cup ever, but it will also place him in the running to beat Tiger Woods’ record for most matches won in the Presidents Cup’s history.

Will This Be The Year Of The Internationals?

Nick Price has strongly hinted at the fact that he deemed 2017 to be the year of the Internationals.  He also proclaimed to have had no reservations to bringing in rookie Emiliano Grillo as a captain’s pick – one of four rookies who will be competing for the International side this year.  Grillo had been named the PGA 2016 Rookie of the Year and has managed to place two top 10 finishes this year, as well as an 11th place finish.

Price said that it was the PGA Rookie of the Year award that had put Grillo on their radar – and in his opinion a truly explosive player.

The 2017 Presidents Cup will be Lahiri’s second.